The Virginia shooting comes three days after a shooting at a gay nightclub in Colorado Springs left five dead.

A mass shooting at a Walmart in Chesapeake, Virginia Tuesday night that left six people dead was carried out by one of the store's workers before he took his own life by turning the gun on himself, the Chesapeake Police Department says.

Their conditions are currently unknown and following a search by a SWAT team at the individual’s home, police believe there is "no risk to the public at this time," Solesky added.

The employee has not been identified as police say they have yet to contact his next of kin. Prior to the shooting, officials say he was not familiar to law enforcement. He died of a self-inflicted gunshot wound, police say. 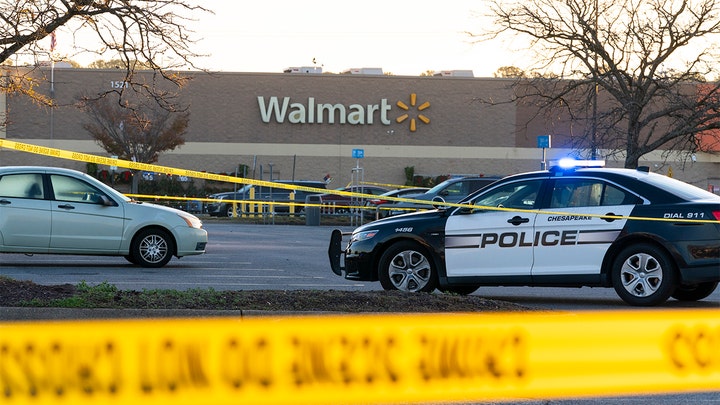 Law enforcement work the scene of a mass shooting at a Walmart, Wednesday, Nov. 23, 2022, in Chesapeake, Virginia.  The store was busy just before the shooting Tuesday night with people stocking up ahead of the Thanksgiving holiday.  (AP Photo/Alex Brandon).

"The investigation is still ongoing," Solesky said. "We will be processing that scene for days."

The comments from the police chief come after a video emerged of an employee claiming a store manager carried out the mass shooting.

Kevin Harper, a Walmart employee who managed to flee the store, said in a video that "we lost a few of our associates."  "I just left out of the break room, the manager comes in there and started capping people up in there. Started shooting bro," Harper said.

Chesapeake police earlier said they responded to an "active shooter" call at the store located along Battlefield Blvd. at approximately 10:12 p.m. When officers arrived, they coordinated with a tactical team to enter the store, where they found multiple bodies, said Chesapeake police spokesman Leo Kosinski.

The shooting happened inside the store, but police confirmed at least one body was found at its entrance, Kosinski said at a briefing.

Over 35 to 40 minutes later, officers walked throughout the store, where they found multiple people dead and rescued other victims, he added.

"It's sad. We're a couple of days before the Thanksgiving holiday," Kosinski said.

The City of Chesapeake confirmed at least seven fatalities, including the lone gunman, but said many details are pending the police investigation.

"We’re only a few hours into the response, so we don’t have all the answers yet. Chesapeake Police continue their investigation into the active shooter event at Walmart on Sam’s Circle. We do know there are multiple fatalities plus injuries and the shooter is confirmed dead," a tweet read.

Walmart, Inc. said it was "shocked" by the shooting and that it was cooperating with law enforcement efforts.

Sen. Mark Warner, D-Virginia, said he was "sickened" and urged residents not to travel near the area.  "Sickened by reports of yet another mass shooting, this time at a Walmart in Chesapeake. I’ll be monitoring developments closely," Warner tweeted.

He added: "In the meantime, I urge all those in the community to listen to guidance from local law enforcement and stay away from the scene."

Rep. Elaine Lauria, D-02, tweeted: "Enough is enough."  "Praying for the victims, their families and colleagues, and the Chesapeake community tonight," she added.

Rep. Bobby Scott, D-Virginia, called the shooting "yet another incident of senseless gun violence."  "My thoughts are with the victims and their loved ones," he added.

Virginia state Sen. Louise Lucas, who serves as the President Pro tempore, echoed these sentiments in a statement calling for an end to gun violence.

"I am absolutely heartbroken that America’s latest mass shooting took place in a Walmart in my district in Chesapeake, Virginia tonight.  I will not rest until we find the solutions to end this gun violence epidemic in our country that has taken so many lives," Lucas said.

Photos and videos of the scene show about 40 emergency vehicles in the parking lot. Other photos show dozens of people standing just outside the store, beyond an area police have tapped off.

Police are urging people to avoid the area as they continue to sweep through the store and conduct their investigation. Members of the public who know someone who works at the store or who may have been affected are being instructed to go to the Chesapeake Conference Center, where a family reunification site has been set up.

"This site is only for immediate family members or the emergency contact of those who may have been in the building," the city said.

The Virginia shooting comes a mere three days after a shooting at a gay nightclub in Colorado Springs, Colorado left five dead and 17 wounded.

The Associated Press contributed to this report.