Farmworker allegedly kills 4 co-workers, plus 3 at truck company, then turns self in.

HALF MOON BAY >> A 67-year-old “disgruntled worker” shot and killed four people at a coastal farm and three more people at a nearby trucking business near the heart of Half Moon Bay on Monday afternoon, authorities said, marking the state’s second mass shooting focusing on Asian Americans, just two days after a gun massacre in Southern California.

Chunli Zhao of Half Moon Bay was arrested just more than two hours after a series of shootings that ended with seven victims and rocked the tranquil surfside community widely known for its world-famous Mavericks wave break and a popular annual pumpkin festival that draws thousands to the intersection of Highway 92 and Highway 1. 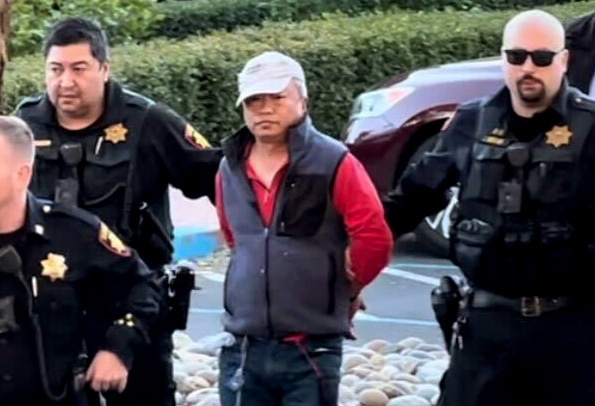 Chunli Zhao, 67, the suspect in the killing of seven people, was taken into custody in Half Moon Bay on Monday. COURTESY OF KATI MCHUGH

“I am offering my heartfelt condolences to the families of victims, the coastal community and the city of Half Moon Bay. This kind of shooting is horrific, and today it has hit home,” Sheriff Christina Corpus said Monday evening.

It was just off Highway 92, less than a mile east of that crossing, that San Mateo County sheriff’s authorities were called to Mountain Mushroom Farm about 2:20 p.m. Monday for a report of a shooting with multiple victims.

At the farm, responding San Mateo County sheriff’s deputies found four people, both male and female, dead from gunshot wounds. A fifth shooting victim was still alive when found and was rushed to Stanford Medical Center with life-threatening injuries.

A short time later, deputies discovered a second shooting scene, this time about 3 miles south on Highway 1 near a series of farming businesses where three more people were found shot to death.

There was no immediate sighting of a gunman, but the manhunt was over about 4:40 p.m. when a sheriff’s deputy spotted Zhao in his car in the parking lot of the Half Moon Bay sheriff’s substation and ordered him out of the vehicle. In an arrest captured on video, several deputies could be seen with guns drawn as Zhao walked toward them with his hands up. The deputies quickly took him to the ground and subdued him. Zhao acted alone, the sheriff’s office said.

Kati McHugh, who described herself as a member of the local agricultural community, was at the Half Moon Bay sheriff’s substation for a news conference on the shooting when the suspect arrived and was quickly taken into custody by deputies.

“I was surprised to see (the suspect) here and of course hopeful that he came to turn himself in,” McHugh said. “It was shocking and I was very impressed with the way the officers took care of the takedown. It wasn’t in any way adding energy to the situation.

“He was quiet. He didn’t react much when he was taken down and it all happened pretty calmly.”

The devastation that has so far been blamed on Zhao soon became clear. Local elected officials and media reports said Zhao had been an employee at the farm and that several of the dead were his co-workers. San Mateo County Supervisor Dave Pine told The Associated Press that Zhao was a “disgruntled co-worker.”

The sheriff’s office said in a statement that a weapon was found in Zhao’s car and that “there is no further threat to the community.”

Corpus called the shooting “a devasting tragedy for this community and the many families touched by this unspeakable act of violence.”

People who have been displaced or separated from their loved ones as a result of the shootings are being tended to at a family reunification center set up at the IDES Hall at 735Main St. in Half Moon Bay. Those with information that might help the shooting investigation can contact Detective Richard Deschler at 800-547-2700.

The mass shooting follows one Saturday in Monterey Park — just east of Los Angeles — that left 11 people dead, all of them Asian American.

“First Monterey Park and now Half Moon Bay. Enough is enough. How many more must die?” San Mateo County Supervisor David Canepa said in a statement. “Although the details are sparse, one thing is true. The victims died from guns. My heart breaks for the families.”

Canepa said the county has pledged $2 million over the next two years to launch a gun violence prevention program. The program, he said, aims to improve public safety by “boosting efforts to remove guns from the hands of felons, stalkers and other people prohibited from firearm possession.”

Congresswoman Anna Eshoo said she was also monitoring the situation in Half Moon Bay.

“My gratitude to the San Mateo Sheriff’s Office who took the suspect into custody and are working the two scenes of the murders,” Eshoo said in a statement. “Half Moon Bay is a beloved and tight-knit community and we all stand with them and the families of the victims during this dark hour.”

The Bay Area has seen a string of mass shootings in recent years, including its deadliest in May 2021 when a disgruntled mechanic killed nine people then himself at a Valley Transportation Authority light rail yard near the Santa Clara County Sheriff’s Office in San Jose.

Austin Turner contributed to this report.