CAPE CANAVERAL, Fla. >> NASA’s Orion capsule reached the moon Monday, whipping around the far side and buzzing the lunar surface on its way to a record-breaking orbit with test dummies sitting in for astronauts.

It’s the first time a capsule has visited the moon since NASA’s Apollo program 50 years ago, and represents a huge milestone in the $4.1 billion test flight that began last Wednesday.

The close approach of 81 miles occurred as the crew capsule and its three wired-up dummies were on the far side of the moon. Because of a half-hour communication blackout, flight controllers in Houston did not know if the critical engine firing went well until the capsule emerged from behind the moon, 232,000 miles from Earth. 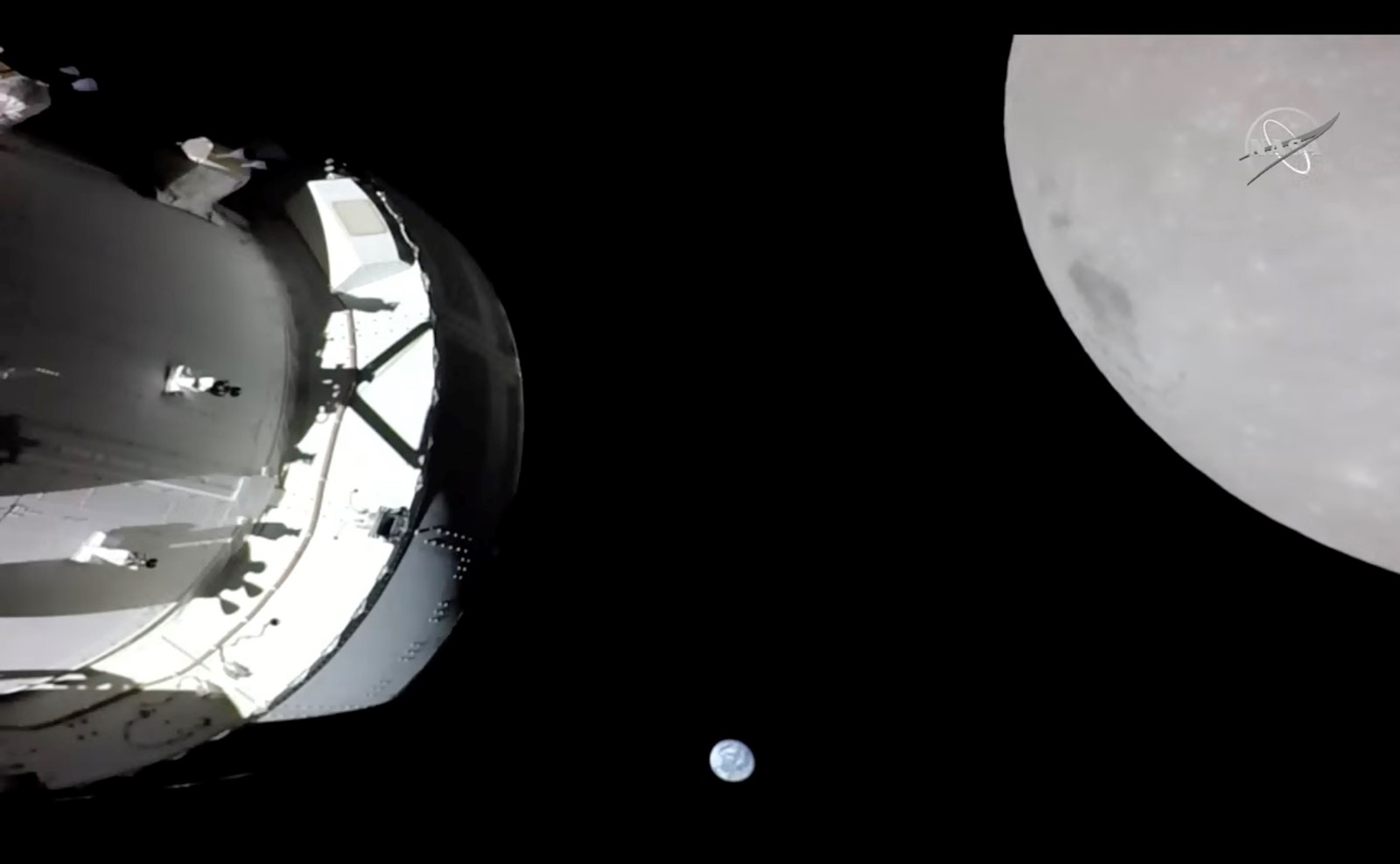 A camera on Orion’s solar array wing captures a view of the spacecraft, Earth and moon on Monday. Orion was making its outbound powered flyby of the moon as part of the Artemis I mission. NASA VIA AP

The capsule’s cameras sent back a picture of the world — a tiny blue orb surrounded by blackness.

The capsule accelerated well beyond 5,000 mph as it regained radio contact, NASA said.  Less than an hour later, Orion soared above Tranquility Base, where Neil Armstrong and Buzz Aldrin landed on July 20, 1969.

“This is one of those days that you’ve been thinking about and talking about for a long, longtime,” flight director Zeb Scoville said.

And much of that talk has been in Southern California, where local engineers and scientists are playing a role in NASA’s overall Artemis moon mission. Among local connections to this mission, Artemis I, NASA’s Jet Propulsion Laboratory manages NASA’s Deep Space Network. Officials say the network is critical to tracking and communicating on the mission.  The DSN will support a constant flow of data with Artemis I’s uncrewed Orion capsule beyond low-Earth orbit after launch.

That includes the mission’s outbound journey and return, plus all the mission’s trajectory maneuvers in between, ensuring commands can be sent to the spacecraft and data can be returned to Earth. Also working in tandem with NASA’s Goddard Space Flight Center in Greenbelt, Maryland, NASA said the networks help “to create a foundation for future crewed Artemis launches to the lunar surface.”

Earlier in the morning on Monday, the moon loomed ever larger in the video beamed back, as the capsule closed the final few thousand miles since blasting off from Florida’s Kennedy Space Center, atop the most powerful rocket ever built by NASA.

Orion needed to slingshot around the moon to pick up enough speed to enter the sweeping, lopsided lunar orbit. Flight controllers evaluated the data pouring back, to determine if the engine firing went as planned. Another firing will place the capsule in that elongated orbit Friday.

This coming weekend, Orion will shatter NASA’s distance record for a spacecraft designed for astronauts — nearly 250,000 miles from Earth, set by Apollo 13 in 1970. And it will keep going, reaching a maximum distance from Earth on Monday at nearly 270,000 miles.

The capsule will spend close to a week in lunar orbit, before heading home. A Pacific splashdown is planned for Dec. 11.

Orion has no lunar lander; a touchdown won’t come until NASA astronauts attempt a lunar landing in 2025 with SpaceX’s Starship. Before then, astronauts will strap into Orion for a ride around the moon as early as 2024.

NASA managers were delighted with the progress of the mission. The Space Launch System rocket performed exceedingly well in its debut, they told reporters late last week.

The 322-foot rocket caused more damage than expected, however, at the Kennedy Space Center launch pad.

The force from the 8.8 million pounds of liftoff thrust was so great that it tore off the blast doors of the elevator.