A gunman killed 10 people and injured another 10, some critically, inside a Monterey Park ballroom late Saturday, turning a festive night of celebrating the Lunar New Year into one of terror and setting off a hunt for the suspect that stretched into the South Bay, which ultimately ended with the man shooting himself.

The following day, initially meant to continue the new year festivities, suddenly became mournful as the 61,000 residents of Monterey Park — as well as the rest of Southern California — awoke to news of bloodshed in the normally sleepy town.

As the manhunt continued, experts discussed how the shooting could rekindle fears in the wider Asian American community that has struggled with a recent rise in hate crimes —even as the shooter’s motives remain unknown — while the proliferation of firearms and gun violence in America once again moved to the center of political debates.

The day ended, however, in something resembling a bittersweet victory.

The suspect, Huu Can Tran, was dead — by his own hand. More death had been avoided, according to Los Angeles County Sheriff Robert Luna, when two community members in nearby Alhambra disarmed the man at a second dance studio.

And, officials said, the community could now begin to heal.

“Feel safe. You are no longer in danger because the shooter is dead,” said U.S. Rep. Judy Chu, who represents the area and once served as Monterey Park mayor. “This community is resilient. What I see at this moment is that we are indeed resilient. We are stronger together.”

The downtown area of Monterey Park, a city east of Los Angeles with a population that’s about 65% Asian, enjoyed a joyous mood earlier Saturday as thousands converged to welcome the Year of the Rabbit. Shooting a man who Luna later identified as Tran, 72, sprayed gunfire into the Star Ballroom Dance Studio on West Garvey Avenue, which had been filled with folks continuing the Lunar New Year revelry.

Five men and five women were left dead. Details on the victims had not been released by Sunday evening.

Within minutes, Monterey Park police officers had converged on the scene, benefiting from the Police Department being close to the ballroom and still having folks working the site of the city celebration, said Chief Scott Wiese.

The officers, Wiese said during a Sunday morning press conference, saw people flood out of the dance hall. But they did not find Tran.

Instead, he apparently made his way north to Alhambra.

The man, seen in surveillance footage wearing eyeglasses and what appeared to be a beanie, entered the Lai Lai Ballroom, about 3 miles away, Luna said Sunday evening.

But before bloodshed could begin there, Luna said during the day’s last press conference, two people disarmed him.

The weapon found there, Luna said, was a semiautomatic pistol with an extended magazine, meaning it could hold more ammunition than normal.

That weapon, Luna said he believed, is not legal in California.  “I consider the two men to be heroes,” Luna said of those who stopped a second shooting from happening. “It could have been much worse.”

But when police arrived in Alhambra, Tran was once again gone.

By dawn, a full retinue of law enforcement agencies had begun investigating the nation’s deadliest mass shooting since May, when a gunman killed 19 students and two teachers at an elementary school in Uvalde, Texas.

The Los Angeles County Sheriff’s Department ultimately took over the investigation. At the Sunday morning press conference, details were relatively scant, though Luna did say there was a white “van of interest” and that detectives were keeping “an open mind” to any possible motives.

Those motives were still unknown, at least publicly, as Sunday ended.

But Tran apparently switched out the van’s plates, Luna said, and traveled about 31 miles south across the county to Torrance, the South Bay’s largest city.

Torrance police officers on the lookout spotted the van near Sepulveda and Hawthorne boulevards, not far from the Del Amo shopping mall.

The van pulled into a shopping center, and officers left their patrol vehicles to approach it, Luna said, when a single shot rang out.

The officers, Luna said, retreated and called for backup. Two armored vehicles boxed in the van.

The area was blocked off with crime tape, and the area became a dramatic scene, with sheriff’s officials saying they feared the van could have explosives or chemicals.

A hazardous materials team and the bomb squad were called in. At one point, a sheriff’s helicopter — one of many circling the area — touched down in a nearby Amazon Go parking lot.

He shot himself. The driver’s side window was pierced with a bullet hole.

Investigators recovered a handgun from the van, Luna said later Sunday. They also found pieces of evidence that tied Tran to both the Monterey Park shooting and the interrupted one in Alhambra.

But the public would have to wait several hours, until a Sunday evening news conference in Monterey Park, to hear official word from Luna that the gunman was dead.

Across the county, meanwhile, Alhambra’s downtown — filled with scores of families, friends, local officials and vendors celebrating the Asian community’s biggest holiday —was similarly shut down.

Police and media members populated the area instead. Crime tape circled the dance studio’s building, one of many in an area populated with strip malls.

Elected officials, including President Joe Biden -- who decreed that flags be flown at half-staff on all government buildings until sunset on Thursday — and Gov. Gavin Newsom —who touched down in the city to meet with officials and residents — offered their support for Monterey Park. Asian American organizations also decried the shooting.

“Monterey Park should have had a night of joyful celebration of the Lunar New Year,” Newsom said on social media. “Instead, they were the victims of a horrific and heartless act of gun violence. Our hearts mourn as we learn more about the devastating acts of last night.”

Some Lunar New Year events planned elsewhere for Sunday were canceled, though others continued as planned.

The USC Pacific Asia Museum, for example, nixed its festival on Sunday, out of respect for the victims and to be cautious. The Tet Festival, in Orange County’s Little Saigon, went on as planned, as did a Mass celebrated by Archbishop José Gomez in Chinatown.

Other organizations, including Stop AAPI Hate, which collects data on rising Asian American hate crimes, issued a statement, declaring that the mass shooting contributed to an enduring unease that has plagued the community in recent years.

“Our community has faced so much tragedy and trauma over the last several years,” the group said. “This tremendous act of violence, on one of the most important days of the year for many Asian Americans, at a place where Asian American families come to gather and celebrate, is sending shock waves through our community.”

At Monterey Park City Hall, meanwhile, a memorial was set up for those looking for a place to collectively grieve.

The memorial started small, with only a smattering of balloons and flowers, but it was expected to grow.

A crisis center for families of victims and others was also set up at the Langley Senior Citizen Center. In the afternoon, there was a prayer circle outside.

Later Sunday night, police pulled down the crime scene tape that had closed off the ballroom.

Kristina Hayes is familiar with the ballroom’s interior.

The building’s storefront exterior belies what’s inside, said Hayes, an instructor there since 2001. It is a large, proper ballroom, she said, with the “exquisite floors” having plenty of space on which dancers can whirl around.

Pedro Corado, an Inglewood resident, was the first to lay flowers and a candle outside the building, once the crime scene tape was gone.

“It didn’t just hurt Monterey Park, it hurt L.A.,” Corado said. “You don’t want something like this to pass over without notice.”

Earlier Sunday evening, Luna stepped to the lectern to reveal the identity of the shooter and his apparent suicide.

Yet the investigation continues, spanning the Southland: Law enforcement officials, for example, executed a search warrant around 8 p.m. at the senior community in Hemet, said Alan Reyes, a spokesperson with the city’s Police Department.

Tran lived there, he said.

What officials were looking for, though, wasn’t immediately known. And other questions also remain unanswered.

How, for one, was the man connected to the dance studios — or was he? Why did he rain bullets inside a building meant to bring the community together and during a celebration no less? How did he obtain his weapons?

Clarity, officials said, will hopefully arrive in the coming days. But for now, there are other, more personal concerns, such as whether the critically injured will recover, how will the community support the victims’ families, and how will residents feel safe again?

Monterey Park Mayor Henry Lo broke down and cried when discussing the tragedy.  “I haven’t slept in 24 hours,” he said. “It’s overwhelming.  And the Monterey Park community is grieving. 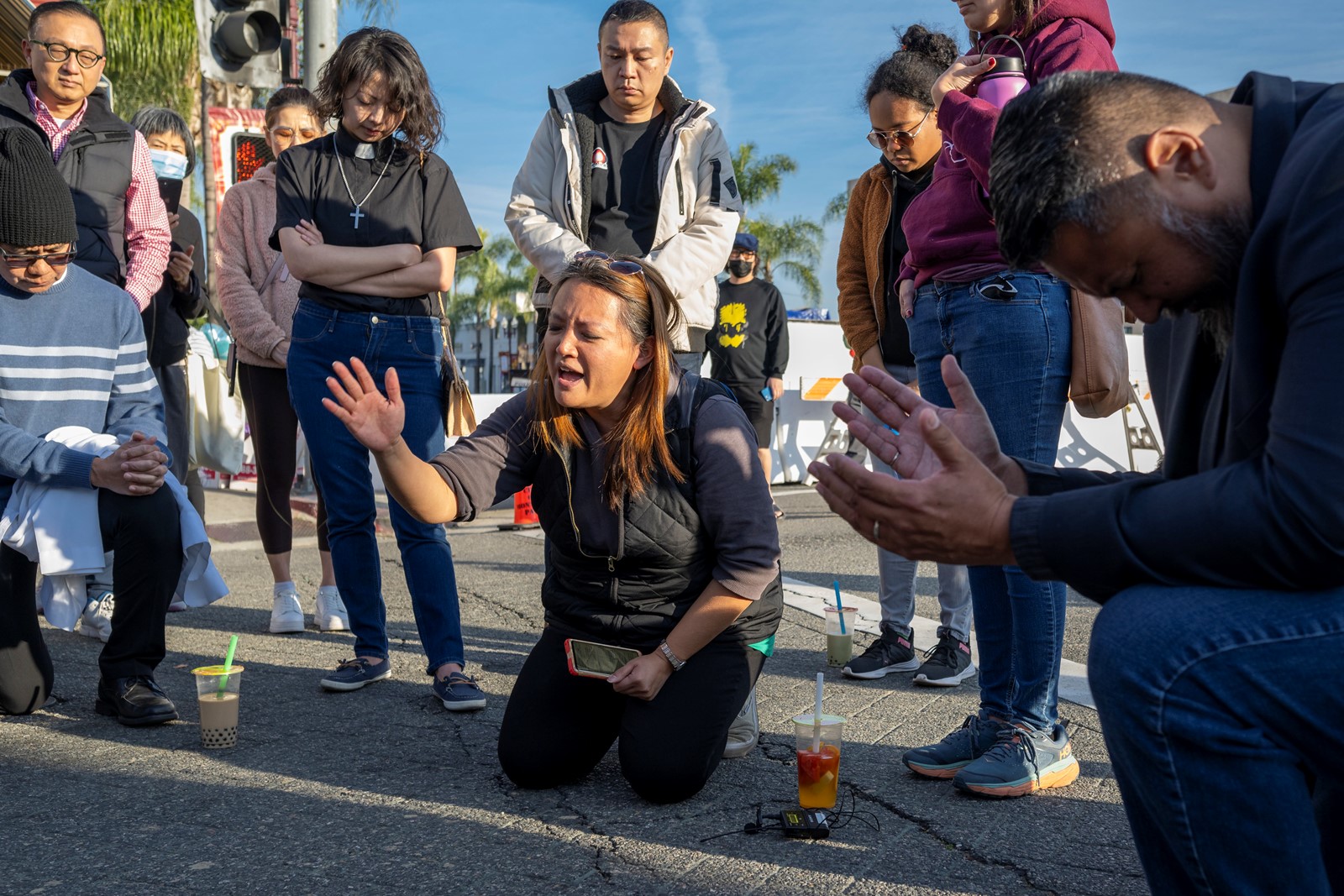 A group of pastors and others join in a prayer circle at Garvey Avenue and S. Garfield Avenue in downtown Monterey Park on Sunday to pray for the victims of the mass shooting at the Star Ballroom Dance Studio on West Garvey Avenue. LEONARD ORTIZ— STAFF PHOTOGRAPHER 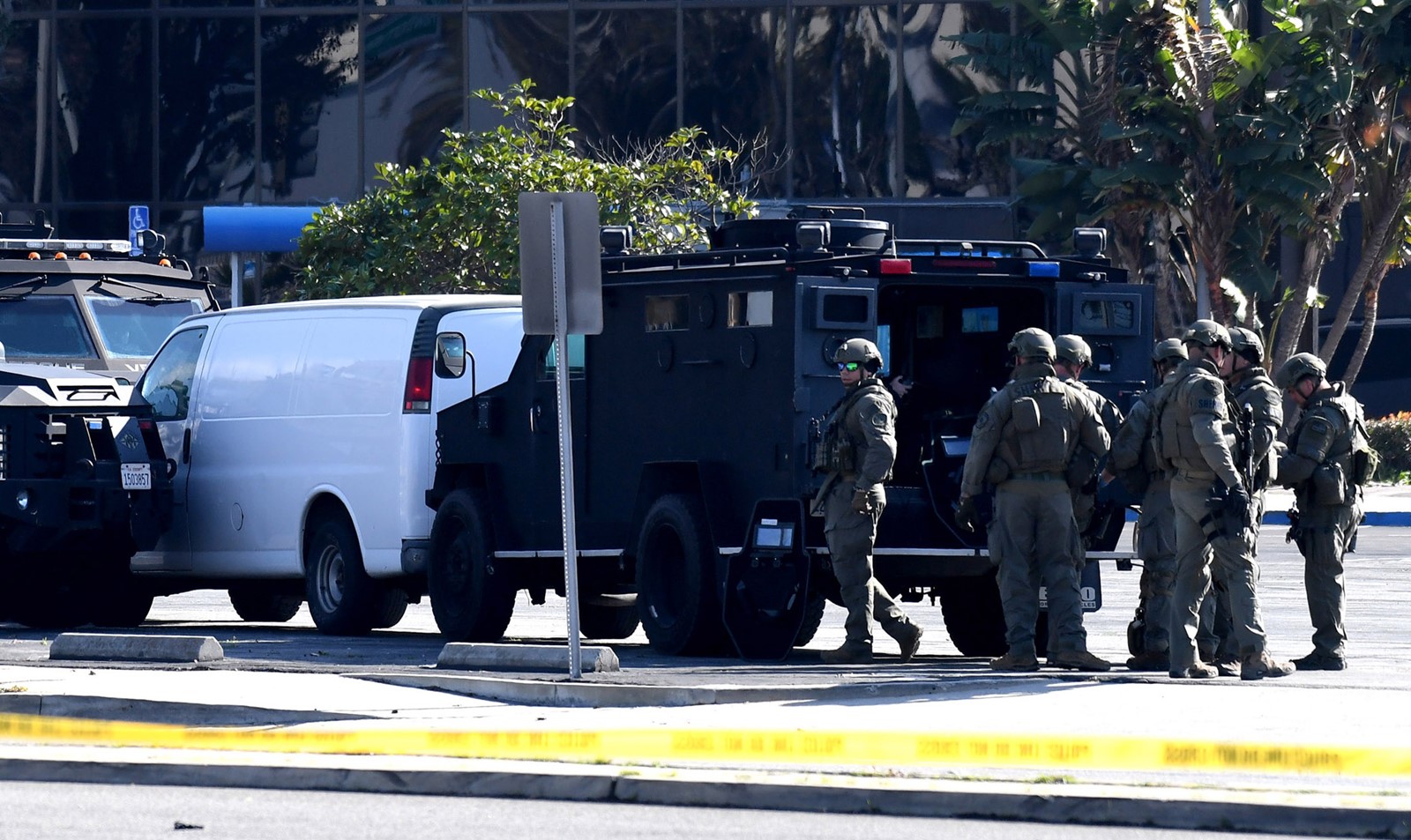 L.A. County sheriff ’s SWAT team members surround a van in a Torrance shopping center parking lot Sunday. Officials later said the van was driven by the Monterey Park shooter and that he killed himself. PHOTO BY AXEL KOESTER 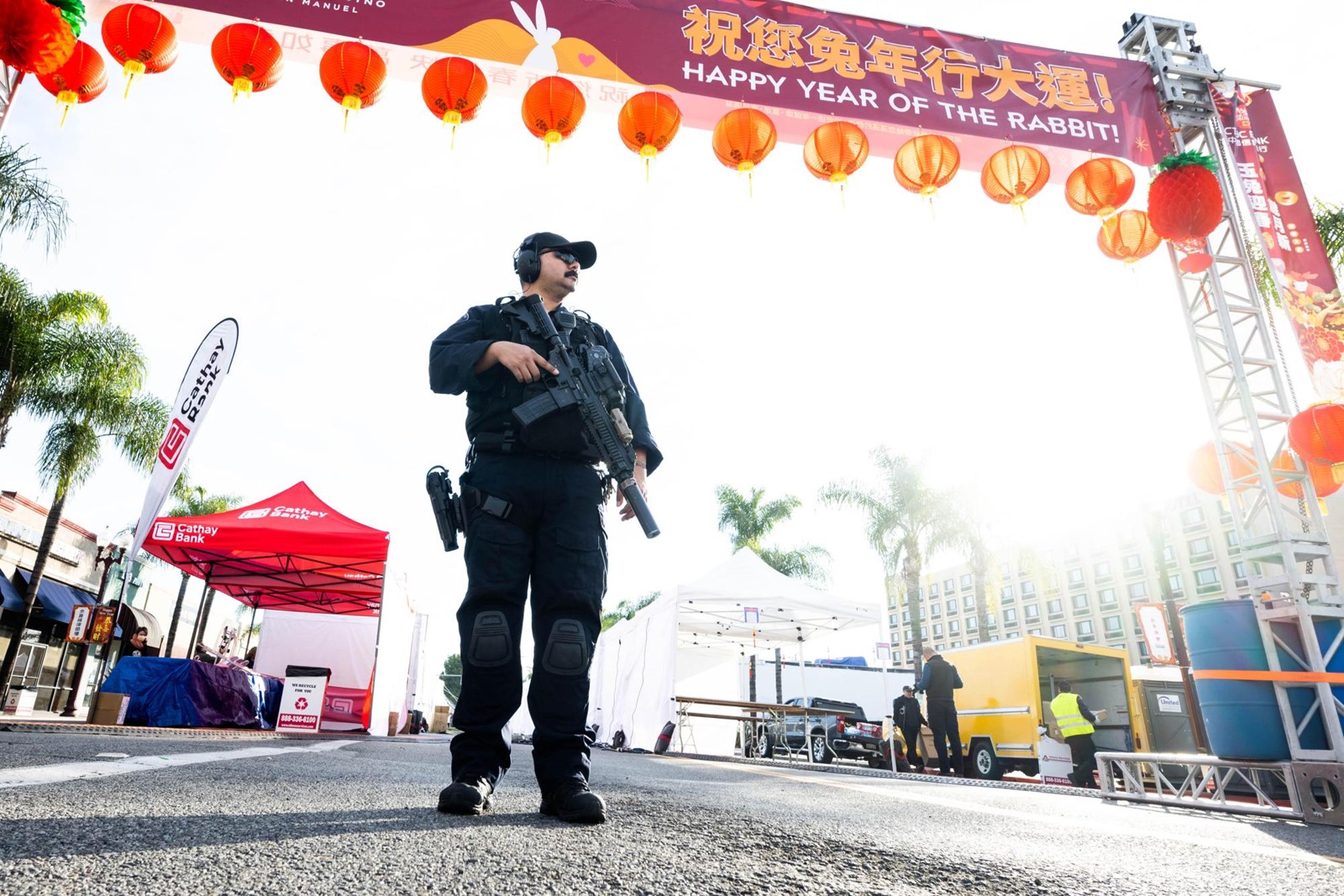 A Monterey Park police officer stands guard Sunday near the scene of a mass shooting in which 10 people were killed at a dance hall near the community’s Lunar New Year festival. SARAH REINGEWIRTZ STAFF PHOTOGRAPHER.